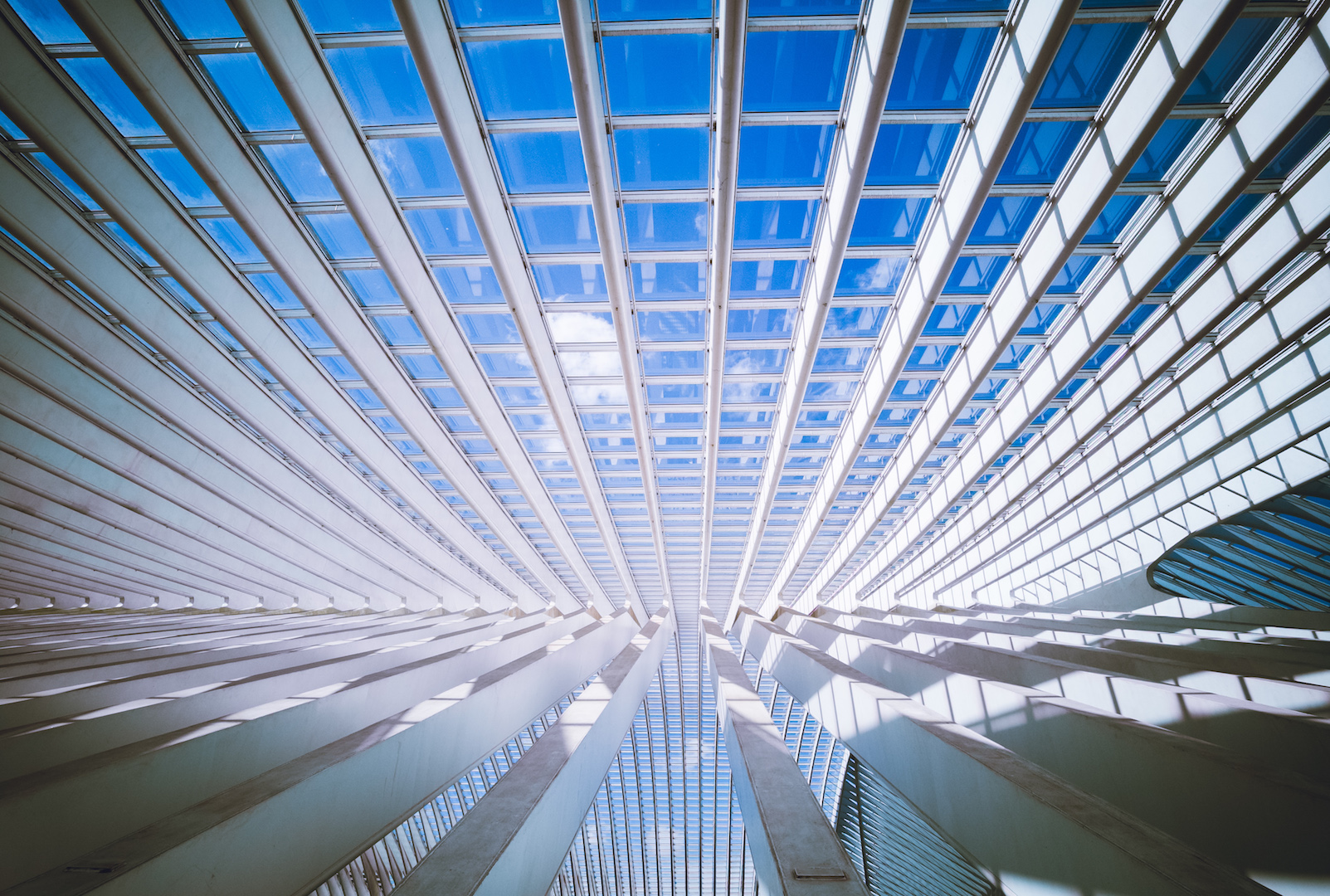 Since the lockdown in Belgium started almost six months ago, I did not travel anymore. I made an occasional trip to nature reserves in Belgium and visited my brother in The Netherlands. I don’t want to travel. Well, not really. But it’s impossible to deny there is an itch to scratch. So my girlfriend and I went on a day trip to Liege to scratch that itch.

After a late wake-up, we got our way to Brussel Central station. Since the beginning of the summer, my girlfriend and I moved in together in an apartment in Brussels. Bye-bye Antwerp for me, bye-bye Ghent for her.

So anyway, we took the train from Brussels to Liege-Guillemins. One of the most beautiful train stations in the world. The current building is 11 years old now. It opened in 2009 to make sure it was capable of handling the influx of high-speed trains.

Anyway, we walked around in the construction by Calatrava for a while. I was taking photos of the structure and Erica posing with the building.

We then moved onwards to Parc Boverie via the Passerella La Belle Liégeoise. A nice bridge for pedestrians and cyclists. I don’t know the architect, but it feels as if it’s an extended part of the Liege-Guillemins train station.

We walked around the park and looked at the geese and turtles in the water. There is also a Fine Arts museum in the park. We discussed whether we wanted to enter or not. Given that we arrived late and it’s was a beautiful day, we preferred to stay outside.

The fact that Corona was still in play might also have had a hand in the decision. Anyway, I will be back at the museum one day.

We continued our walk to the city center of Liege. The train station isn’t really in the center.

On our walk, we passed the DoNuts shop. In the shop window, we noticed a Pokeball-themed donut. Since Erica was wearing a Pikachu mouth mask, we decided to enter and order one.

Unfortunately, that one was only available on order. So we bought other donuts. I had a Twix one and Erica a coffee one. They were delicious, though the iced coffee could have been better.

Anyway, soon after, we arrived at the city center. At the Palace of The Prince Bishops, we had a look around. Right around the corner, you have a famous waffle house. Since Liege is renowned for its Liegeois waffles, we had to go there.

Une Gaufrette Saperlipopette is a famous place in Liege. Something the long line outside confirms. Of course, because of corona and social distancing, the line might have been longer than usual. But still, it was a lot of people.

Still full of the donut, we decided to go back later in the day and buy waffles to eat at home. Spoiler alert, we forgot to go back. So we will have to visit Liege soon and make sure we go there this time!

Close to the shop, you have the Montagne de Bueren. A large staircase. And with large, I mean massive—374 steps high. The stairs take you 70 meters higher throughout 260 meters. That’s a 28% incline. Pretty steep.

Erica did not know about this place before, so imagine her reaction when I told her we were climbing those stairs. Wait, you don’t have to guess, I have a photo of her response!

Halfway through the stairs, we took a breather. Looking at how far we got already and how far we still needed to go. While catching our breath and having a sip of water, we saw some runners going up the stairs without effort.

I always find it crazy how these people decide that’s their workout for the day. Anyway, props to them!

Finally, at the top, you get this view over the entire city of Liege. You can see the train station and surrounding buildings, visit the park, the city center. Everything.

While at the top, you can visit the Parc de la Citadelle. We looked for some shade and caught our breath. We were making a wide range of selfies while doing so.

Since there aren’t that many options to go down again, we took the stairs. I can tell you, going down is so much easier than going up!

We then roamed around the small ‘impasse’ of Liege. Narrow alleys with medieval houses. A bit further, you have Saint Bartholomew’s church. A nice piece of architecture to get a look at. I cannot place it in a specific style. Other than something German.

Since we arrived late, it was getting late already. We wanted to have dinner, but the coffee and donuts just really filled us up. And I was feeling slightly iffy because of the physical intensity of the stairs and the heat.

Earlier, I had asked for recommendations for good restaurants on Twitter. One of the restaurants that came up was Riva. It’s right next to the river Meuse and close to the station.

So we walked there and had the luck of getting a table. The service was excellent—very nice people who want to give you a pleasant experience.

Erica and I had some Thai mussels and Burrata as starters. Then I had the Riva Salade with avocado, shrimp, and salmon. Erica went for the Blue Belge steak with fries. Good food, a lovely setting, and friendly people. I can recommend this restaurant.

Then it was time to go home again. There is a lot more I want to do in Liege. So we will be back. In the meantime, here is a list of things I want to do:

I mentioned my Twitter earlier. I had asked for recommendations there. Since there are a lot of good ones, I would like to share them here with you:

Have you ever been to Liege? Let me know your recommendations in the comments!