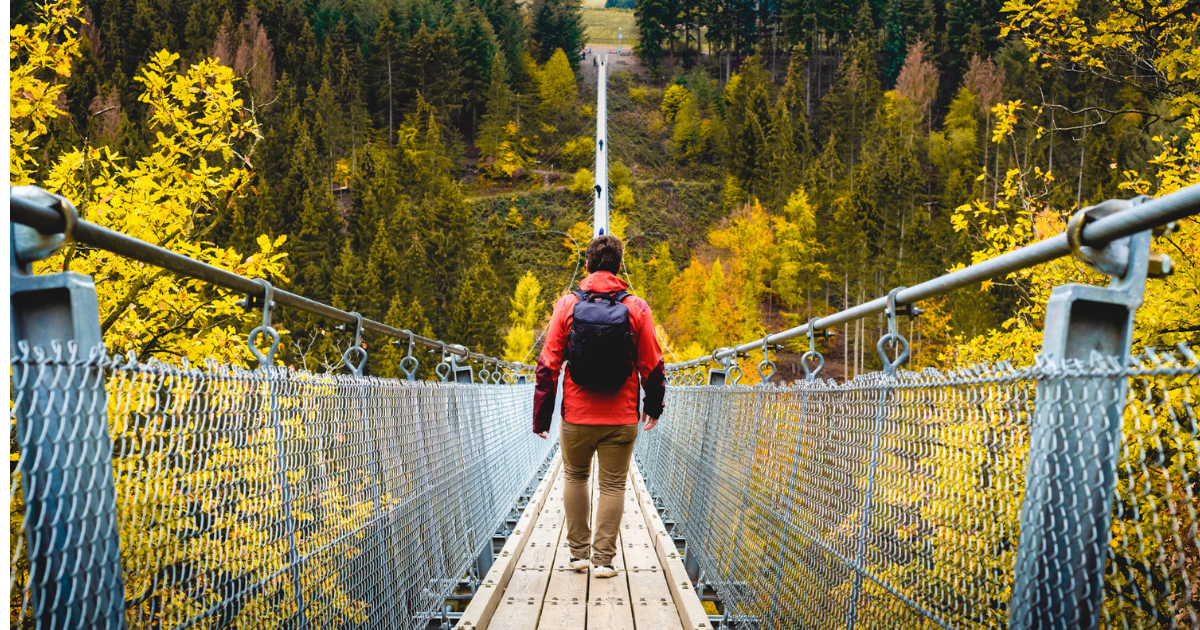 Traveling solo is a daunting experience. A lot of people don’t really dare to go out by themselves. To motivate you and try it yourself, I asked a couple of my travel blogging friends to talk about their first-time solo traveling.

I didn’t put them in any particular order. I just wanted you to know that.

Some of these bloggers are friends of mine, with whom I travel and have fun. Others are people I look up to and read regularly. I am honored all of them took the time to write their story down for me. And for you.

So let’s get into it!

Yannick of Soms Ook Heimwee: Into the outback

My heart feared and trembled before jumping on that one-way ticket plane to Australia. There were even slight signs of tears in my eyes.

Life became more and more a drag, which strongly resonated through my vanes when turning 30. I felt that I needed to make a drastic change. And that change needed to happen fast. Between deciding to leave for a trip around the world for a year and leaving everything behind were just a few weeks. Rollercoaster times. Challenge accepted. Excited.

During my gap year, I worked in a campground in the Australian Outback near Katherine. Chasing Esmeralda, a 4-meter olive python that lived in the women’s shower, away from guests. I bought a 4WD to travel all the way around that giant country.

Sydney-Brisbane-Cairns-Darwin-Perth-Melbourne.  I crossed many deserts, I camped next to crocodile-infested rivers, I went skydiving, slept under the stars and I had the best time meeting new people. The travel bug got me, and I decided to leave my Australian home ground for a while to follow my heart and discover Vietnam, Cambodia, and Bali. I returned after a few months to finish my Australian road trip. Before flying home, I needed to see Hong Kong and New Zealand, two of my desitions ever since. Being able to make bold decisions gave me the ultimate feeling of freedom.

I started my travel blog to keep my mom up to date with stories and pictures. Today Soms Ook Heimwee grew into a platform that helps others to take the enormous step, go out there by themselves and see the beauty of our planet. It’s probably one of the hardest decisions you’ll ever make in your life, but I still have to meet a single person that regretted leaving.

And once you are out there, you’ll notice that the hardest part is yet to come: returning home 😉

I don’t consider myself a solo traveler. Some travel writers circle the globe alone without a second thought. That’s not me, at least not yet. But in 2016 when I was planning a four-week trip to Europe, I had the opportunity to stay in Paris for a few extra days after a friend was coming home to the US. I was apprehensive about it, asking myself if I could handle being in Paris all by myself. And I decided, “Yes, I was ready to give it a go.” And so, I booked my ticket.

I remember waking up the morning my friend left our hotel in the 8th Arrondissement and thinking, “Where will I go?” What will I do?” Knowing that the entire city of Paris was waiting for me was overwhelming and exhilarating at the same time. But once I stepped outside the hotel, I realized that Paris is an incredibly unique and equally fantastic city for solo travelers. I knew immediately that I had made the right decision to stay in Paris by myself. It’s a magical place where you never run out of things to do, and feel alone only if you choose to.

Sure, I was nervous I’d get lost (I did) or get into a situation where I needed to speak French (I don’t). But I told myself that I didn’t know when I’d have a chance to return to Paris – it took me over 20 years from my first trip to come back – and I wouldn’t let fear keep me from experiencing the place I had dreamt about for decades.

What I loved most about my time in Paris was not having to answer to anyone or be on someone else’s schedule. I found myself meandering from one arrondissement to another – touring the Paris Opera House, exploring Le Marais, eating lunch at a sidewalk café, and watching Parisians scuffle along, going about their business. One day, I walked ten miles! I was seeing Paris on my terms and there was nothing that could’ve been more fulfilling.

After a few days in the City of Light, I flew to Milan and spent a day or two alone there as well. I ate gelato, wandered around the Duomo, and shopped on Corso Buenos Aires. Since that trip, I’ve traveled to other places on my own including Bern, Switzerland, Ottawa, Montreal, and Quebec City, Bilbao, and here in the US – Portland, Oregon and Detroit. I will continue to travel alone, thanks to those few days solo in Paris.

Solo travel isn’t for everyone, but everyone should try it once. Have you ever traveled alone?

Would I do it again? Yes! My first-time solo was empowering and enlightening for me, a step toward the realization that I can do anything. After my kids went to college I decided to do a solo trip to Mozambique to work on a Whale Shark Identification and fish surveys volunteer expedition. When I first arrived, I was nervous that I would not be able to keep up. Most of the other volunteers were at least 20 years younger than me. Instead of giving up, I decided to do my best and see what happened.

Everything about the experience was challenging. The terrain was hilly, the sand deep, the ocean wilder than I was used to. The diving was tough for someone with a bad back, and I certainly had a hard time the first few dives. However, I acclimated. By the time the trip was over, I had bonded with the other volunteers and could physically do the tasks set out. Proud? I was so proud of myself, so empowered, so happy! I have done a lot of solo travel since then, and I will continue to do so.

Vetexbart goes to the United States

Traveling by yourself has been a trend for a while now. Partially because of the possibilities that are around these days. My first-time solo was, back when I was 17 years old, to the States, where my heart lies. A ticket back then was 1500 euros. Now, that same flight would be a ‘mere’ 400 euros. Right now, the threshold is lower than ever.

Actually, I would recommend everyone to go on a solo adventure once in a while. That first solo trip of mine was to a penpal in Michigan. A beautiful state in the north of the United States. For six weeks I was inundated in a world and culture that was different from mine. I learned a lot during that period. I met people with whom I, now 15 years later, still regularly talk to. Some even came to visit me in Belgium.

My adventure to Crete, a couple of years later, was also a trip I remember fondly. I was 20 years old when I left to the Greek island by myself. It was a period where I wasn’t too sure about my future path, so I went looking for answers there. In the end, I stayed there for 7 months. Those rash days are the best of my life to this day.

My first-time solo was a very spontaneous one; I was moving between cities and realized the gap between jobs would likely be the only time where I can make an extended trip to travel Asia. I didn’t plan to go by myself and had asked every friend and acquaintance I knew to come travel with me. Schedules couldn’t line up, so I took the plunge and booked a six-week trip to Asia.

I was frightened; I never traveled by myself before this trip, and I had nightmares of all the worst things that could happen to a solo traveler. Fortunately, no mishaps occurred. Instead, I gained a whole new experience on independent travel, learned a lot that I never knew about myself, and met friends who still support me during my darkest moments to this day.

Looking back, my solo travel trip was the stepping stone for a more magnificent adventure where I’d spend a year traveling the world.

My first-time solo experience was to Marrakesh in Morocco; talk about throwing myself in the deep end!

It was manic, an attack on the senses, a conservative country but also inspiring, awe-inspiring and, most of all, a MASSIVE culture shock. I soon realized that maybe this wasn’t the best place to book a trip solo?!

Looking back, it was the best place to start! That first solo trip taught me so much about safety, being responsible for myself, putting myself out there to meet new people and knowing what travel suits ME. Not anyone else. It was a chance to be selfish and do what made me happy.

I ended up having the best time, met loads of new travel friends (that I still talk to now) and had some incredible experiences. I got lost in the souks, had my first hammam, ate goats head and snails at the food markets and went to the Sahara desert. Memories to keep for a lifetime.

It was quite a risk, it could have gone a completely different way. But, I think that having a plan/itinerary, booking accommodation like a hostel to meet other travelers and being prepared with safety tips really helped.

Since that first trip, I have been to Morocco again and again and am in love with it! You can read all about my adventures in my 14-day Itinerary for Morocco and I have lots of solo travel tips from both visits to Morocco here.

If I were to go back in time and give myself some advice, I wouldn’t have waited for someone to take me traveling and would have traveled solo a lot sooner than I did!

It’s been a while now since my first time traveling solo. It was a couple of years ago. As for many who go on a trip alone, I was a bit tired of my day to day. I needed to get out of it for a bit.

So I left for Copenhagen and Berlin by myself. Nothing too exotic and fairly close to home. I enjoyed every bit of it. Meeting new people in the hostels I stayed at, doing things by myself, and boosting my confidence.

I came back completely zen and happy with who I am. It’s an adventure I can recommend to everyone!

What was your first-time solo experience? Where did you go? Tell me your story in the comments below!

4 thoughts on “Bloggers talk about their first-time solo traveling”