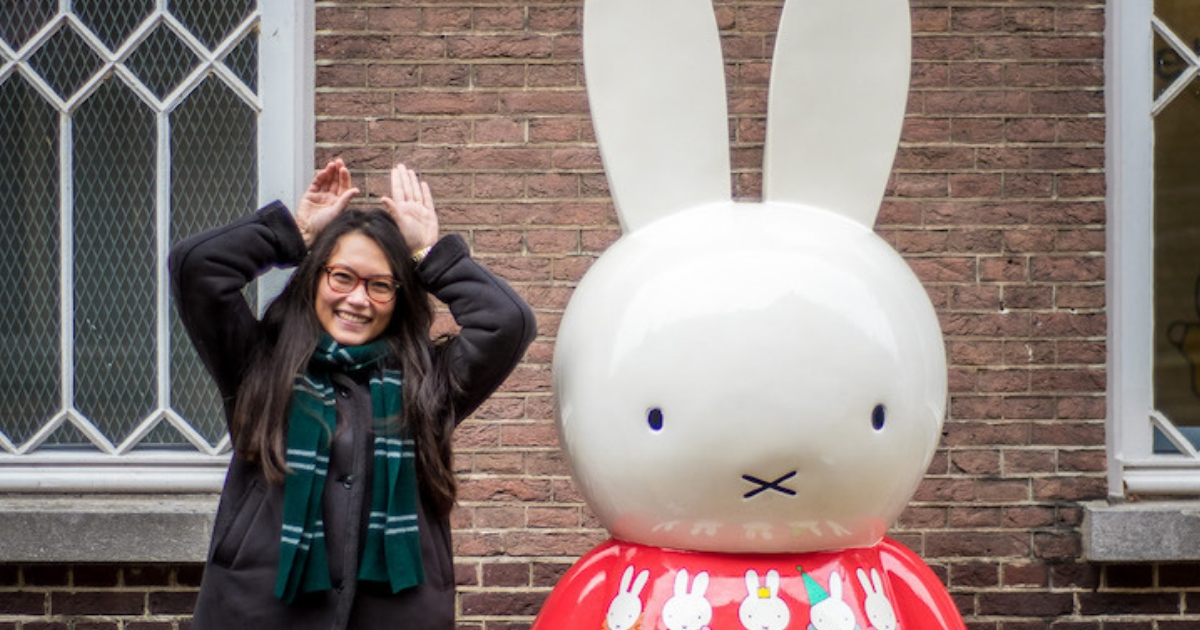 As a surprise for my girlfriend’s 25th birthday, I booked a 24-hour getaway. Not too far, but just a bit of fun away from home. So we headed to Utrecht.

I didn’t just pick Utrecht randomly for our short city trip. Erica, my girlfriend, had mentioned it before. She saw some photos somewhere and wanted to go because it looked like a pretty town.

Anyway, without her knowing we left on Friday. Around noon, as we wanted to have a slow weekend without the need to rush. So around 3 pm, we arrived in Utrecht.

Erica was sleeping in the car for the last 20 minutes or so. Upon arrival, she was still unsure about where we were. Which was a lot of fun for me.

We checked in at the hotel: The Anthony. A rather new hotel build inside an old monastery. I had found it on Secret Escapes. Actually the first time I booked on that website.

So, we checked in. At that moment Erica was so clever to spot information about Utrecht in the hotel. Thus figuring out which city exactly in the Netherlands we were visiting.

After a quick freshening up in the room, Erica wanted to sit at the hotel bar. It looked really cozy and modern. We seated ourselves at the bar and asked for two cocktails.

As it was winter and the sun sets early, we decided to head into town. But first, some oliebollen. A dutch delicacy you have to try in the Netherlands! There was this nice street vendor in front of our hotel, so we ordered a good portion.

It is not the biggest city, but there is plenty to see. We roamed around the city a bit aimlessly. Just going where it looked interesting enough. It started with a stroll through the Hoog Catharijne mall.

A huge mall with plenty of shops. We visited a couple of shops, like the Lego store, and headed back out again.

On to the Vredenburgplein into the de Bijenkorf. De Bijenkorf is a big kind of mall all over the Netherlands. They usually focus on the more luxurious and high-end products, yet they are super popular.

We then walked around Utrecht some more. Next to the romantically lit canals, the beautiful little streets all around the city, and the typical Dutch buildings.

Time for dinner at Vintage

Vintage is in the middle of a culinary Drieharingstreet in Utrecht. They serve tapas in all shapes and forms. Cold or warm. Meat, fish, or vegetarian. Whatever you are up to that evening!

They also have a 12-meter long bar where you can sit to enjoy their equally as long wine collection. Enjoying with both the eyes and the mouth!

It’s safe to say Erica and I really enjoyed our dinner there. We had the Vintage Tapas Plateau, which is a bit of everything. We then ordered some little extra’s afterward too.

Since it was a Friday night, we figured we could entertain ourselves in one of the many bars Utrecht has to offer. I had researched some interesting ones in advance.

Like the Taphuys where you can tap your own beers and wines. Or the Oliver Belgian Beer bar where, you guessed it, they serve proper Belgian beers.

Unfortunately, it was a Friday. So both those places were completely full. We then headed to the hotel to enjoy a drink in the bar there. Which was a great idea, since they really know their drinks. Also, they had changed the menu in those couple of hours.

On the way there we had a kitty greeting us. If you follow me on Instagram Stories you know Erica is a real fan of cats. When she sees one, she has to become friends with them. This time was no different.

The next day in Utrecht

After an amazingly nice breakfast at the Anthony, we headed back into town. Our target was the Miffy Museum. Which, so I learned, it a really big thing in Japan.

Upon arrival, that information was confirmed. A Japanese family making photos with the big Miffy statue in front of the museum. Followed by me taking pictures of my half-Japanese girlfriend with the statue.

An Utrecht-native cycled past us and was visually contended by our little photoshoot.

By the way, in Dutch Miffy’s name is actually Nijntje. Which is short for Konijntje, the Dutch word for a little bunny.

Inside the Miffy / Nijntje museum

The entrance was reasonably priced, though I can’t remember exactly how much it was.

Inside you have these fun little lockers you had in kindergarten to lock away your stuff.

A review on google maps read that you would get through the museum in about 15 minutes. As it was more of a playground for kids. And this was true.

Yet, we had fun going through the museum for those 15 minutes. Learning about the author, the other projects he did, the artists that inspired him, and of course seeing all these Miffy settings and toys.

Maybe I’ll return with my godson one day, he will really like playing there.

After leaving the museum we walked through the Sonnenborg parc back to the city center. At that moment we had food on our mind. We walked past the Dom and halted at Van Delft – De Pepernotenfabriek.

If you don’t know, pepernoten are a kind of Dutch biscuit popular during the Christmas and Saint Nicolas period. I really like them.

So naturally, we bought about 5 or 6 kilograms of those biscuits. The normal ones and a variety of different tastes: cappuccino, tiramisu, coconut, and stroopwafels.

Those biscuits were meant for at home, so we still had to find some lunch.

While thinking about what we would eat, we had a stop at the Croquetten Boutique. Here you can find croquette / kroketten in different forms. Kroketten is another Dutch delicacy.

Basically, it’s a filling surrounded by breadcrumbs which then gets deep-fried. It is delicious!

Normally it’s with mashed potatoes and often shrimp is added. Though, at Croquetten Boutique they have so many more ways to make this. A must-try for anyone interested in the culinary of the Netherlands.

While eating our kroket, we figured we might go for an actual meal at Waku Waku. Though, after that kroket, we actually already had enough. Anyway, our last hour in Utrecht. So we had to make the most of it.

Waku Waku proud itself in providing a plant-based culinary experience. I had the Dutch Weed Burger, which is not with marihuana but with seaweed. Just to make sure you don’t get disappointed. 😉

Erica had the double dutch kapsalon. A vegetarian take on yet another Dutch culinary highlight. Though, it might be Belgian… and you usually buy it at a kebab place…

Anyway, we both enjoyed our meals and stay in Utrecht a lot. We sure will be back one day to explore even more (of the local restaurants). But for now, that was the end of our trip. We needed to be in Ghent in time for a little celebration with friends!