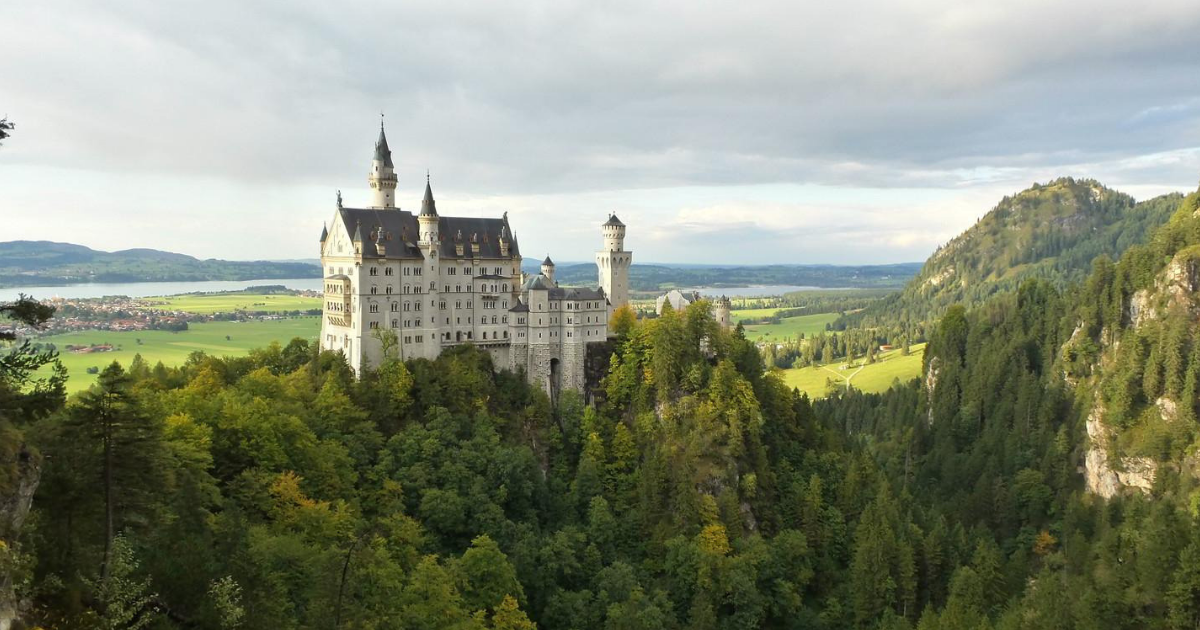 Not too easy right?

For that reason, I gave the bloggers for this article plenty of time to think about it all. Well, I hope I gave them enough time… Anyhow, on with the blog post!

By the way, while we are on the topic of the best experiences. I also have a post about my worst travel experience to read after this one. 😉

One of my best travel experiences was visiting Neuschwanstein Castle in Germany. When I first saw the castle, there was fog creeping up its walls and lots of greenery all around it. It made me feel like I was in one of those stories with mythical creatures, witches, and fairies. The fall foliage around Neuschwanstein just added to the breathtaking view, leaving a permanent impression on me.

The tour in the castle was great as well, and just additionally spiced up the overall experience. We had some very entertaining tour guides too who perfectly captured the history of the Neuschwanstein Castle alongside the life of King Ludwig II.

Curious Campers on their trip to Coral Bay – Western Australia

In knee-deep water, rays glide past you and enormous northwest snapper swims around your legs. Ten or twenty meters further out the first mounds of coral appear and with them, fish of all shapes and colors. The water is warm which is lucky – you won’t want to get out!

You can also swim over the main part of the reef. Walk a kilometer or two down the beach, swim out 50 meters and you can drift along the reef back to Coral Bay. Along the way, you will see everything from sea turtles and friendly reef sharks to a huge variety of fish.

From Coral Bay, you can also go on tours to swim with manta rays and whale sharks. Most visitors to Australia will head to the Great Barrier Reef, but for a snorkeling adventure of a lifetime, try Coral Bay instead.

If you ever make it to Coral Bay, another thing to see in the region are the gorges at Karijini National Park or for another unique snorkeling experience go to South Australia to swim with thousands of giant cuttlefish.

Dalibro about his self-drive safari in Etosha, Namibia

Sometimes I feel like every new trip brings the best travel experience so far, better than the last one. So it is often time who is the ultimate judge of the overall juiciness of what you’ve experienced. That cheeky old tick-tock misfit.

In my case, my best travel experience was doing a self-drive safari in Etosha, Namibia. The country itself is something incredible – so different from everything I’ve ever seen. There is so much diversity, so much to see and photograph – endless plains, treacherous Atlantic coast, striking sand dunes around Deadvlei (guess why it has “dead” in its name…), and the amazing Etosha pan (which is more than alive).

And it was the safari experience in Etosha that really found the way into my heart. The whole thing felt like out of a Jules Verne’s book. Not that Jules Verne’s 19th-century characters would cruise around in a massive diesel 4WD car. But it just seemed so adventurous to cruise between elephants and zebras, and yield the right of way to giraffes. We were even lucky enough to come across some rhinos who went for a morning walk.

In Etosha, I felt like a guest who was kindly invited to the animals’ natural habitat, their home. And that was simply mind-boggling!

Traveling With Sunscreen on their trip to the Flaming Cliffs

Our trip to Mongolia was, from beginning to end, our best (and most unique) travel experience.  We arrived in the capital, Ulaanbaatar, by train from Beijing – the Trans-Siberian railroad, no less!  Our train journey was certainly long, at around 30 hours, but it was 1000% worth doing.  Imagine waking up in the morning, looking out the window, and seeing the gers (yurts) of the Gobi Desert chugging by.  We had officially arrived in Mongolia!

From the capital, we took a tour with Golden Gobi (read our full tour review here).  Touring around Mongolia is so different from touring around almost anywhere else.  It’s still a nomadic society, so plans can change at any minute, as when the host family we had been planning to stay with was nowhere to be found; they had had to move with their herd to find water.  No need to fret, though, as you can park your van and set up your tent almost anywhere!

The best part of our tour was the morning when we decided to visit the Flaming Cliffs at sunrise.  Picture the beautiful national parks in the American west, but without a single other visitor. Total quiet except for a few birds.  I don’t know where else in the world it’s possible to have an experience like this. If you haven’t been to Mongolia, put it on your list now.  You definitely won’t regret it!

Let me know your favorite experience while traveling in the comments. I’m looking forward to reading them!

6 thoughts on “Travel bloggers talk about their best travel experiences”