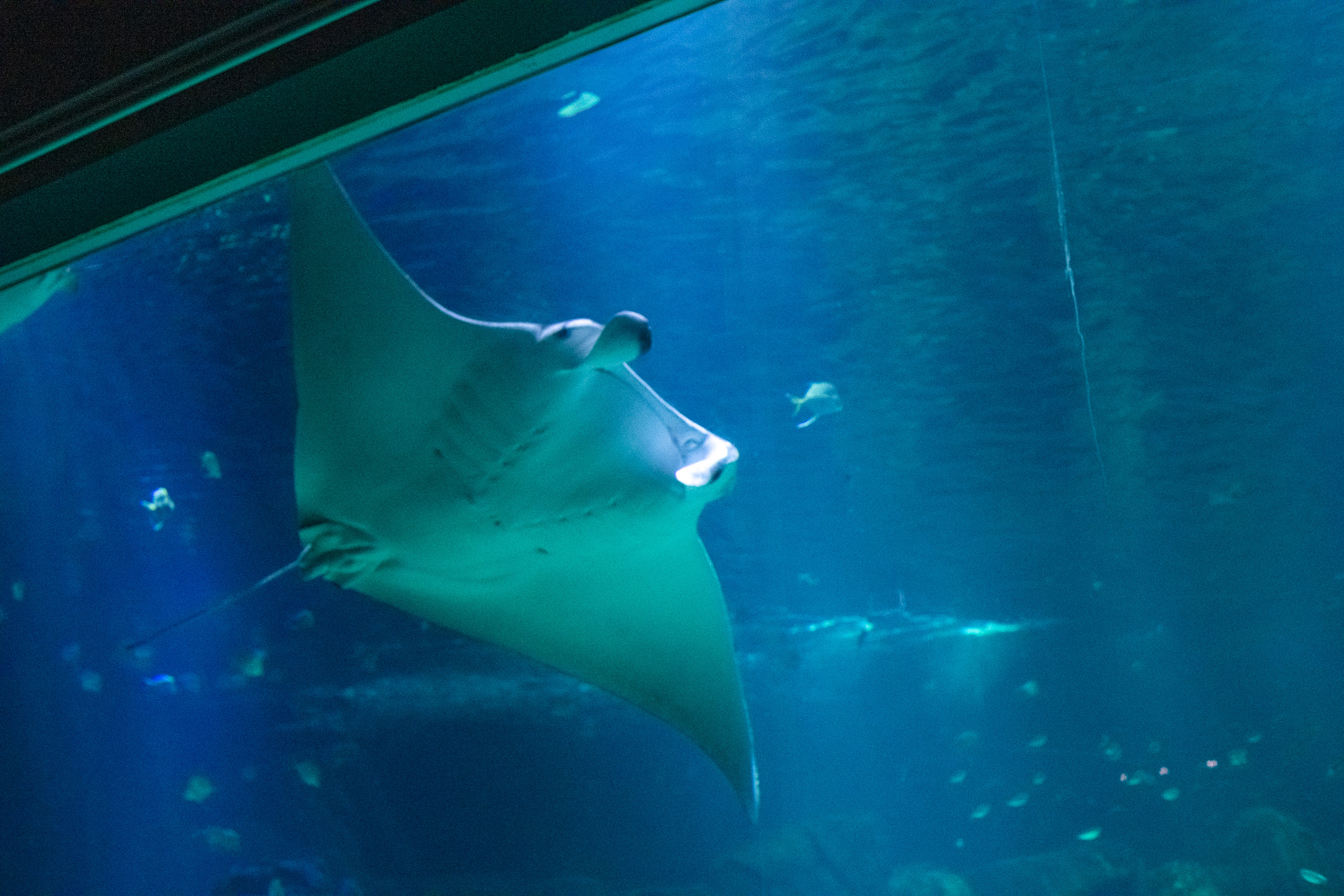 Not too far from the Belgian border, there is a French city called Boulogne-sur-Mer. The main economic activity of the town is fishing in the North Sea. Yet, apart from providing delicious fish, the city is also known for preserving precious species. At Nausicaá you can find an impressive amount of species and specimens.

Based right at the Opal coast in France, Nausicaá focuses on the ecology around the fish industry. They do this by supporting and founding several programs, but also by educating.

The educating part, of course, is why you would pay a visit to the enormous aquarium.

The difference between the 3 Nausicaa’s

Let’s first define the three Nausicaa’s in the world.

Nausicaá in Northern France is, of course, the main one. It’s also the one this blog post is about.

Then you have Nausicaä. See the accent difference? This Nausicaä is a (must-see) Studio Ghibli movie.

And last, you have Nausicaa. No accent. Daughter of King Alcinous and Queen Arete of Phaeacia. She has a (brief) encounter with Odysseus.

From now on, any use of Nausicaá is about the aquarium.

Okay, so why am I talking about this immense collection of water molecules? First of all, because I love water and its inhabitants. It’s soothing the be under the water. It’s also relaxing to hear the waves breaking on a beach.

There is also something hypnotizing about watching fish. It’s some weird kind of meditation.

But I get that clearing your mind isn’t enough argumentation to motivate you to visit Nausicaá.

A second reason is the vast collection of animals. The most significant part is fish. Yet, they also have seals and several reptiles. In total, the building has over 1600 species of animals and corals. Do corals count as animals? Well, you can find the answer to that question at Nausicaá.

The third reason why you need to spend a visit is educational. It’s a massive building with excellent exhibits. I can recommend taking a whole day to visit and experience it all. You will learn a lot about the oceans and rivers on our planet.

You will also be amazed at all the weird animals we share this Astro-rock with.

A lot to see and a lot to learn. So to make it all manageable, they made it into three exhibits.

Journey on the High Seas

This exhibit is inspired by the island of Malpelo near Colombia. It’s part of a mountain range, going as deep as 4000 meters below sea level. You can imagine the range of ecological niches in this biome.

The main attraction of this exhibit is Europe’s largest basin. Forty different species live in that aquarium alone.

Around the basin, you learn about the deep sea. With detailed footage of species living so deep, we didn’t even get a chance to catch them and study properly.

Around the aquarium, there are plenty of opportunities to get a glimpse of the giant oceanic manta ray. Oh, by the way, his name is Charles. Ray Charles.

The absolute mind-blowing part of this exhibit is the cinema screen-sized window—20 meters wide and 5 meters high. You can get up close to the fish, sharks, and rays gliding right past you.

I have spent a good 30 minutes just watching through this window. Good thing they provided seating!

As a species, we are relatively reliant on the oceans and rivers. So obviously, Nausicaá dedicated an exhibition to that relationship.

You can spot several reptiles in this exhibit, too, like turtles and cayman. There are also several sharks and beautiful jellyfish.

Oh, and there is a touching basin where you can pet rays. If you ever wondered how they feel, this is your chance.

In The Eye of the Climate

As the name implies, this exhibit is about the climate and the change it is going through. As 75% of the earth’s surface is oceanic, it’s no surprise that a lot of global warming is felt in the oceans.

One room is dedicated to making you experience the different effects of global warming. With a 360 degrees projection all around you, you are right in the middle of the action.

But it’s not all doom and gloom. In the end, there is a wall dedicated to different solutions on how we can all contribute.

What Nausicaá does for the world’s ecology

Okay, quick round with some interesting numbers (at least I found them interesting).

The aquarium is located near the city center of Boulogne-Sur-Mer. From the Belfort to Nausicaá is a 25 minutes walk. Not too far, in my opinion.

As a result, almost all hotels in Boulogne-Sur-Mer are close. I stayed at Evancy. From my room, I even had a view of Nausicaá and the sea behind it.

From there, it’s less than a 15 minutes walk to the entrance of the aquarium. It’s also only 15 minutes from the Belfort in Boulogne-Sur-Mer

My personal experience at Nausicaá

My trip was fantastic. Thanks to the friendly people of Nausicaá and Glenaki who organized the trip, I had some incredible experiences. The first evening of our arrival, we had the chance to visit the giant aquarium privately. We had the big window to ourselves with our group, which is also possible for businesses organizing events.

Before we visited the aquarium, the lovely people from the tourist office gave us an excellent tour of the city—especially the street art, which I will write about in another blog post.

The second day we spent visiting several exhibitions. Before leaving again (always sad when it’s a fun destination), we had lunch at the Calypso restaurant in Nausicaa. I can recommend the fish and chips! It was nice to see how the aquarium has so many visitors.