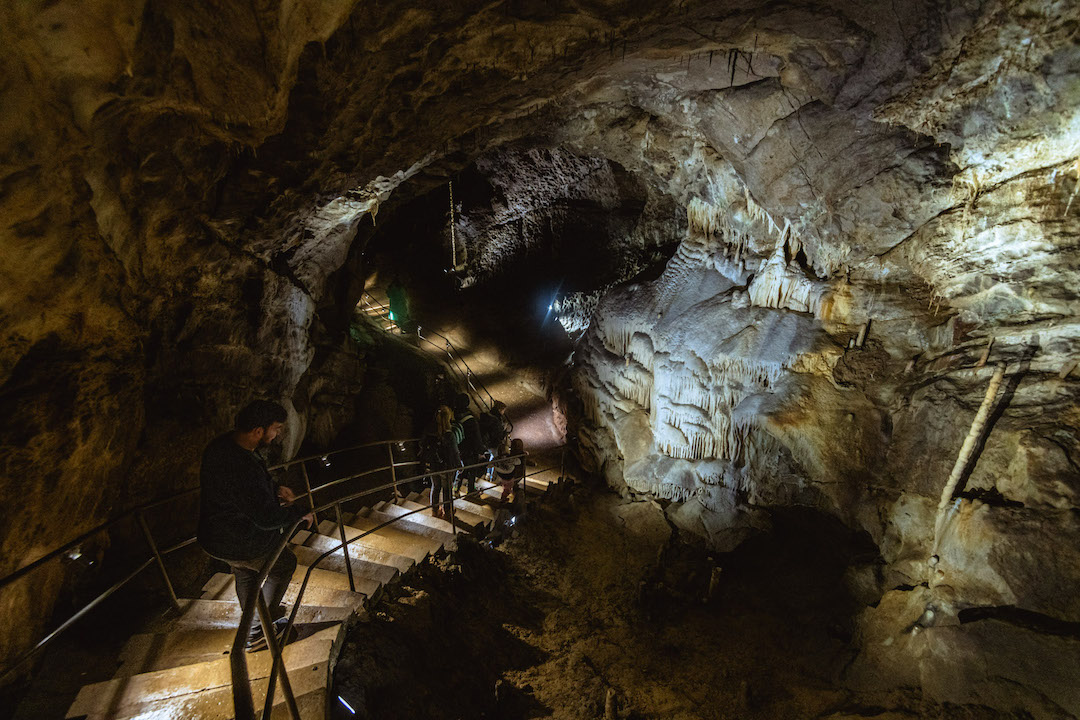 For Belgians, the Caves of Han are famous. We’ve all visited them or at the very least heard about them. It’s the first Belgian UNESCO Global Geopark and worth visiting if you’re around. And you can camp right next to the caves now.

Around the caves, there is plenty to see and photograph, like the fantastic wolves in the wildlife park. You can come closer to them with telelens and make a stunning close-up.

But of course, you want to know about the caves. Because they are darker, it’s tricky to photograph them. An extra difficulty is the group tour. You can’t choose your own pace, meaning you have to run and gun it from time to time.

Photographing in the Caves of Han

There’s also no way of using a tripod or a flash. Making you depend entirely on your skills in the exposure triangle.

As a quick reminder: The exposure triangle is the imaginative triangle you get if you position ISO, aperture, and shutter speed. These three factors influence your photo’s exposure (hence the name).

As a photographer, it’s your job to find a good balance in them. Ideally, without compromise, that seldom happens in the ‘wild.’

I can tell you the settings I’ve used in the caves of Han, and you can copy them:

But just copying those settings without understanding why I used them will not get you far.

Why using a wide-angle lens is a good idea.

I want to start by talking about my lens choice. I went for a wide-angle. This offers me a broad enough vision to photograph as much of each cave as possible. I could have used a telelens and gone for detail shots, but in those lighting situations, it’s hard to get a sharp image that way.

With the wide angle, I can make landscapes of the insides of the caves. It also has to do with the shutter speed settings.

Since we want to let in as much light as possible, I prefer to shoot with a slow shutter speed. Of course, I could try a 1-second exposure. But remember, no tripods, so it’s all handheld.

To figure out the lowest possible handheld exposure/shutter speed, you can go with your lens; there is a relatively simple formula.

Take the focal length of your camera (in this case, it’s 16-35). That’s it. When photographing at 16mm, you can go as low as 1/16th of a second for your shutter speed. It’s best to go faster. But in a pinch, that’s possible.

What aperture to use in the Caves of Han

Next up is the aperture. This one is tricky. The aperture controls your depth of field, and since we’re doing landscapes inside the Caves of Han, we want as much as possible of it.

However, stopping down too much will either slow down our shutter speed or boost the ISO. Both are not so favorable.

The lens choice helps here again too. With a wide-angle lens, the depth of field is often higher already than with a telelens and gives you some more wiggle room. For that reason, I chose the wide-angle lens too.

ISO settings for my Caves of Han photos

Last but not least is the ISO. Typically you would want to keep it as low as possible. Well below the 800 ISO, for example. But in this case, that’s not possible. I used ISO 3200. On my Nikon D850, that’s still okay to do. It can handle the noise pretty well, and with a bit of noise reduction in Lightroom, the little noise left is fixed.

How to photograph the Caves of Han in Belgium: keep your aperture wide enough, pick the slowest shutter speed you can handhold, and set your ISO according. All while using a wide-angle lens and embracing the darkness.

More about the Caves of Han

The caves are a national treasure that is worth the visit. A visit usually takes you about an hour and 15 minutes. Guiding you for 1.6 kilometers and over 367 steps. It’s a beautiful space underneath a hill. Small corridors lead you into massive halls.

You get to see small rock formations, enormous stalagmites, curtains, and parts of the underground river.

People have used some caves for over 10.000 years ago, and other parts are only discovered in the past century. A guide will walk you along the most exciting features. And most importantly, tell you all about it.

Bring a warm sweater or jacket, as it’s 9 degrees in the caves. No matter what season.