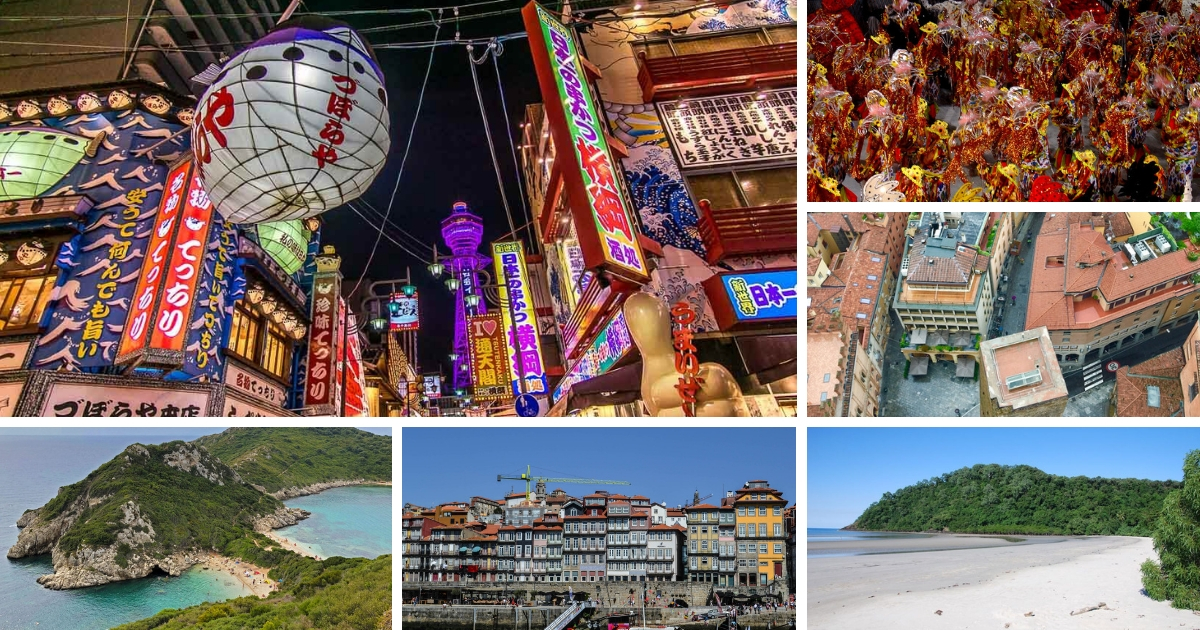 with 2020 approaching fast, it is time to maybe look at the best travel destination options you have for the coming year. For that reason, I asked a couple of my fellow travel bloggers what their recommendations are.

And the votes are in…

Cape Tribulation: where the rainforest meets the reef by Curious Campers

Cape Tribulation is one of the few places where you can visit two world heritage listed natural wonders in the same day. The Great Barrier Reef and Daintree Rainforest are both less than 30 minutes from the Far North Queensland town. There is no better place to base yourself to explore the beauty of the reef and the rainforest.

The great thing about exploring the Great Barrier Reef from here is that it is so close to the mainland. There are no day-long trips on crowded boats here. Instead, it is a 25-minute blast out to the reef on a rubber duck style boat with around 20 other people. Before you know it, you will be snorkeling over beautiful coral and amazing marine life.

The Daintree covers a large area but a great place to start is the Daintree Discovery Centre. Here you can take a self-guided tour on boardwalks and aerial walkways. As well as the beautiful forest vegetation, there is an incredible range of wildlife. Look out for everything from cassowaries to colorful butterflies. There are also many guided tour options that will take you to more remote parts of the forest.

Cape Tribulation is 150 kilometers north of Cairns and there are a range of accommodation options available. Sure, getting there is an adventure, but it will be an experience you’ll never forget!

This summer, I visited the Ionian gem Corfu Island in Greece. I had a wonderful time and was stunned by the beautiful nature of the island. It has everything for everyone. If you want a good nightlife, visit Kavos for partying 24/7 or the stunning Corfu Town to do some shopping and visit fortresses.

Corfu is a large island with lots of cultural, architectural, and religious attractions. So, this won’t be your usual vacation. Instead, you will be exploring all kinds of charming Greek villages and tasting delicious local food. Yet, this doesn’t mean that swimming and sunbathing are off the table. On the contrary, Corfu has many fantastic sandy beaches that must be on your bucket list too. Be sure to visit the famous Issos and Paleokastritsa beaches where James Bond’s movie “For Your Eyes Only” was filmed in Corfu.

You can get to Corfu by plane or ferry. To explore the island properly, I would suggest renting a car, a motorbike, or a quad to get around the narrow dirt roads. If you want to make a budget-friendly trip, make sure to catch the late mid-September season. It’s still warm and sunny, while the prices have gone down and it’s not as crowded.

Osaka in Japan for the 2020 Olympics by enSquaredAired

In 2020, Japan is going to take the world stage thanks to the Summer Olympics. If you’re lucky enough to be in Japan for that occasion, I highly recommend spending some time outside of Tokyo to visit Osaka.

Osaka is a great place to visit thanks to its vibrant nightlife and crazy food scene. Osaka is often referred to as the food capital of Japan because of its incredible street food, cheap eats, and sushi joints.

As well, Osaka is a great place to use as a base to visit different towns and cities in one day, thanks to its central location in the Kansai region. Whether it’s visiting the friendly deer in Nara or eating the world-famous beef in Kobe, you can visit many neighboring cities by train in less than two hours from Osaka

The Carnival in Rio de Janeiro by John Rodgers

I could write a whole bucket list of places that you just have to visit in 2020 but those are already on 1000s of lists and you have probably seen them all. I would rather concentrate on one of the best events we have ever been privileged to see which is “The Carnival” in Rio de Janerio.  The parades are like nothing you have ever seen before and this is coming from a person who lived in New Orleans for years. We have been to Superbowls, the Indy and Daytona 500 and run with the bulls in Pamplona and none of them is in the class of Carnival. The 2020 Carnival is from February 21st through 26th

The parades took place in the streets for many years but now they take place in the Sambadome. The floats just kept getting bigger and bigger until they were simply too tall to be pushed down the city streets by hand. Oh yes! These 4 story tall huge floats are all pushed down the entire parade route by hand. They have now created a one-half mile long parade ground with grandstands on each side that seat 90,000 people and the tickets usually only available through a tour group.  The event takes place two nights in a row and the best group of dancers and floats wins first prize.  That is the most coveted trophy in Brazil except perhaps the Soccer World Cup. This is so popular that it is broadcast on all television channels throughout the entire country.

Go see it, you will be happy that you did. The colors and music are indescribable. If possible spend some time in Brazil and visit the Amazon as well. This is an event and a country that you can’t afford to miss.

Bologna as a foodie paradise by Luggage and Life

Bologna should be on your 2020 travel list for a few reasons. The first is that it’s not super popular among tourists, who mostly stick to the Rome – Florence – Venice route. The second is that it has a fun, youthful vibe thanks to its university, which means there’s no short supply of music, art, performances, concerts, and other events. The third is that there’s a lot to see, and because the city is small, all the main sights are pretty easy to get to. And the last (and maybe most important one) is the food!

Many of Italy’s most famous foodstuffs were born in Emilia Romagna, the region that Bologna is in. Lasagna? Check. Prosciutto? Check. Parmigiano? Check. Mortadella? Check. Balsamic vinegar? Check! Tortellini?! Check!!! If you’re a foodie, wander down Via delle Pescherie Vecchie. Shop for fresh produce, cheeses, cold cuts, meat or fish, or stop and sample some of Bologna’s best at one of the many salumerie on the street (Simoni is my personal favorite). Book a table for dinner at Trattoria della Santa, a spectacular little spot just outside the bustling city center (bonus – it’s also easy on the wallet). Don’t miss the city’s many markets, like Mercato di Mezzo and Mercato delle Erbe. Still hungry for more? Hop on the bus and head to FICO Eataly world, a massive park dedicated to Italy’s amazing food culture.

In between meals, be sure to head up to the Santuario della Madonna di San Luca, where you’ll get beautiful views of the city. The walk is pretty grueling, but there’s a little train that goes from Piazza Maggiore if you want a ride up or down. Speaking of the city’s main piazza, be sure to check out all is has to offer, from the Fountain of Neptune to the Basilica di San Petronio. Don’t miss the archway of Palazzo Podestà (the building across from San Petronio), where you can whisper into the corner and communicate with someone on the other side of the archway. Climb the Asinelli Tower for another great view of the city, and explore the Sette Chiese at the Basilica di Santo Stefano. Whatever you’re into – whether it’s food, music, art, architecture, or awesome nightlife (for that, head to Via del Pratello) – Bologna’s got it all.

A Porto city trip by Stories by Soumya

Porto, the second-largest city in Portugal and an upcoming cultural hot spot is my top recommendation for the best places to visit in 2020.

There are tons of things to do in Porto including river cruises, wine tastings, lovely views, and art sampling. You can easily jump on one of the many cruises on the Douro River or take a day to admire the rolling hills of the Douro Valley. Climb the Clérigos Tower to get some stunning views of the city. Be dumbstruck by the opulence of Palácio da Bolsa. Or try some great wine in Porto Gaia.

If you are a culture lover, take an Azulejo trail through Porto. Numerous churches and official buildings in Porto are adorned with these beautiful blue tiles. Igreja de Carmo and Capela de Almas are two popular churches where you can view azulejos in all their glory. The Sao Bento train station is another unlikely but gorgeous addition.

The best way to explore Porto is on foot. You never know what treasures you may find here while getting lost in the narrow alleyways. You can even get on an antique tram and whizz past quaint shops and adorable houses. Porto will never cease to surprise you.

The city of Porto has something for every traveler. That is why it is such a great place to add to your Portugal itinerary.