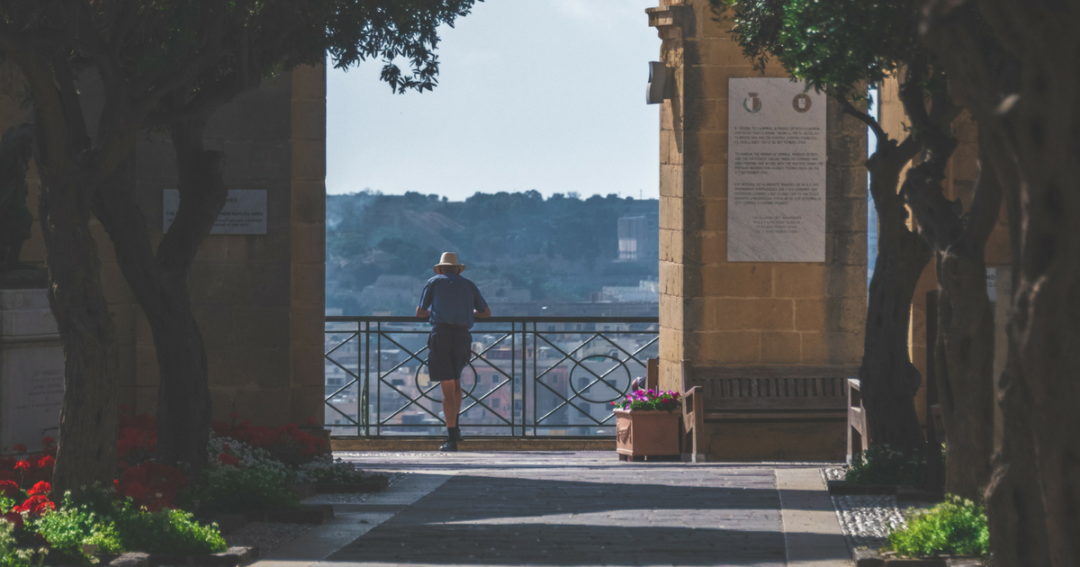 Malta was always a bit of a mystery to me. I remember discovering the existence of the island when I was little. I always asked my parents to go there. Mainly because it is an island. Something that really spoke to me.

A second thing was that it seemed to out of reach and mysterious. Well, it’s not at all out of reach. You can actually find a lot of reasonably priced flights there. What I did discover during my trip to Malta, are the contrasts.

Day 1: Valetta and the opening party

After a flight from Brussels and a bumpy landing, we arrived at Malta Aiport. The air was gray and the wind was ruining everything. All the Maltese were in shock and talking about how unique “the storm” was. They also assured us that it would be gone the next day.

For me, it was a regular Belgian summer day. But hey, maybe I’m just too used to it.

At the airport, a taxi was waiting to bring us to the Maltese capital, Valetta. During the car ride, we made sure to get some Maltese words in our vocabulary.

Bonjou: Means “Hello”. Kinda like the French “Bonjour”.
Merhba: Which you use as a welcoming greet.
Caw: Pronounced like ciao… and it means the same.
Awrite: Which is just their way of saying alright.
Hanini: which means sweetheart. Maybe be a bit economical with using this word.

You can find more words on the website of Air Malta.

Upon arriving we ate the local specialty in King’s Own. A restaurant in the city center, it’s a bit hidden though. So keep your eyes open for this one. I had the fried goat’s cheese as a starter and the fried rabbit as the main course.

Caution: The Maltese like to fry their food and give you big portions. Just a little heads-up. 😉

St John’s Co-Cathedral, an intro to the Knights of Valetta

After the great lunch, we decided to head into the city and spot some of the highlights. the first one is super impressive already.

The St John’s Co-Cathedral is not allowed the official title of a Cathedral. But that doesn’t really matter. It’s a sober looking building on the inside, but the ornamental inside makes up for that.

The floor is covered with gravestones of the old knights that used to found and protect Valetta. The walls are covered in gold and carved stones. The ceiling is a huge painting.

In one of the side buildings, you can spot some of the work by Caravaggio. Make sure to have a look at his work!

Exiting the Co-Cathedral, we walked around the city. During our visit Valetta hosted a Green Festival, covering the entire city-square in colorful flowers. The city is perfect to just stroll around and letting the buildings impress you.

At the end of our walk, we arrived at the Upper Barakka Gardens. There are several moments a day when they shoot the canons. The gardens provide a beautiful view over the harbor (which is all natural apparently) and the Three Cities. A must visit on a sunny day!

After our visit to Valetta, we jumped into another taxi and headed for St Paul’s Bay. This is the hotspot for partying tourists in Malta. The reason for our visit was the Lost & Found festival.

The festival and surrounding of St Paul’s Bay contrasted so hard with the old and picturesque look and feel of Valetta. It was the first of the many contrasts I noticed on Malta.

In the morning, after a strong breakfast, Carolina from MC Adventure was waiting for us. She was going to show us show nice vantage-points.

The first stop was the Golden Bay, where the movie Troy was shot. We hiked around the Ghajn Tuffieha Bay, which is absolutely amazing. The water is a shade of blue I didn’t know existed yet.

In the water, you can often find people practicing their surf skills and paddle boarding. On the rocks around the bay, you can hike and mountain bike. Malta is a place of adventure.

Carolina, our guide, told us that if the weather is perfect to surf on one side, it’s perfect to kayak on the other side. In Malta, the wind is always coming either from the South or the North.

To proof this, we drove across the island to Mistra Bay. A whopping 8 kilometers… yeah it’s not that much. As Carolina said, the water was less wavey and perfect for kayaking or a relaxing swim.

Baewatch at Lost and Found

After the hike, we went back to the hotel to freshen-up. We had a pool party at Cafe Del Mar to attend. It was a pool party, so almost everyone walked around in a bikini and swim shorts. The perfect way to get a tan, relax with friends, and practice some dance moves.

I put the emphasis on “practice” some dance moves.

It got a bit to Geordie Shore for me, so to go full fancy we decided to have dinner at Bahia. A classy restaurant with great foods, perfect service, and a nice selection of wines. You can find it in the cozy little village Lija.

Another contrast in Malta. You can go from full drunk party to fancy eating in a restaurant.

At the end of dinner, we jumped into a taxi and headed for the actual festival. Lost and Found is located in the Uno Village near Mdina. A location that breathes party. The festival had a nice atmosphere and the DJs had me dancing in no time.

The line-up of the festival is amazing, but I’ll limit myself to the artists I saw: Haai playing techno, DJ Target getting grindy with hip-hop, The Black Madonna bringing the groove, and Four Tet blasting the House bangers.

Day 3: Getting active at sea

The next day we needed water, lots of it. So, what’s better than going to the sea? In Mellieha Bay, we got on a boat that would show us around Comino. Comino is a smaller island belonging to Malta. There are only 3 people permanently living there.

The boat stopped at some photographic highlights like the Santa Maria Caves, Santa Maria Bay, and Elephant Rock.

In Blue Lagoon I quickly changed to my swimming trousers, since I had the chance to try out some waterskiing. I tried but never got up for a long period.

There’s a first for everything. Despite the beautiful hills, perfect canyon, and excellent humidity, I wasn’t able to get it up.

After that adventure, we took it more quietly by swimming around in the Crystal Lagoon. There you can enjoy the extremely blue and clear water.

Around 2 PM we arrived back at Mellieha Bay and had lunch at Munchies. This restaurant is right at the beach and overlooks the beautiful Bay.

After lunch, we drove off to Popeye Village. Now it’s a theme park, but it used to be the film set for the movie Popeye with Robin Williams and Shelley Duvall.

We then continued the drive to Mdina, an old city in the middle of the island of Malta. You can wander around the small streets and alleys of the ancient city. Enjoying the expertly forged doorknockers, the narrow corridors, and views from the castle walls.

If you look closely, you will notice on the squares it the location of Ned Stark’s beheading. Whoops, spoilers!

After check out and a short drive back to Valetta, we visited the Upper Barakka Gardens again. We took the elevator down and looked for our water taxi. In the harbor, you have cute little gondola’s that bring you across. A ride only costs 2 euro’s and is totally worth it!

We arrived at the Three Cities where we looked for the office of Rolling Geeks. This is an organization from a guy from my hometown. Antwerp represents. He started a company in Malta that rents electric golf carts.

The golf cart allows you to explore the three cities and surrounding area in a relaxing and fun way. All carts are provided with a screen with GPS and a guide. So you know what you are looking at, the moment you are actually looking at it.

Unfortunately, the time came for us to hand in the carts and leave for the airport. Flying back to Belgium with a lot of memories and a craving for more.